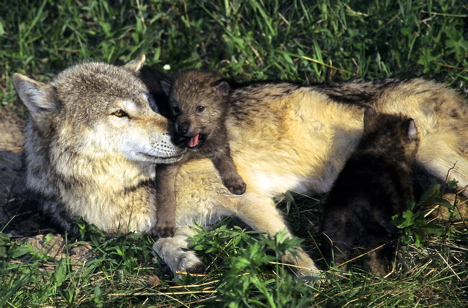 Obviously, from the presented information as of right now, there is no compromise between people concerned about wolves and how to handle populations. Until groups are able to negotiate their differences and keep in perspective all attitudes towards the wolf, they will not be able to agree on a specific decision.  For nearly fifty years wolves have been protected in Wisconsin.  In 2012 with the delisting of the wolf by the United States Federal Government a wolf hunt has been implemented.  It appears that the state of Wisconsin’s use for the wolf only extends as far as Federal expectations on wolf populations.  Is this the balance? Wolf populations in Wisconsin currently stand at about 700.  Considering that the wolf in Wisconsin had disappeared altogether in the 1960’s, and 700 wolves are in the state, this has been quite an accomplishment.  The wolf is back to stay in Wisconsin.  Finding the balance will need to be done slowly over time.  It’s difficult to say that the balance of today will be the balance of the future.  Through a slow moving process a balance between the wild wolf and society will be struck.